WHAT IF Spider-Man JOINED My Blog?

Hello and Happy New Year my loyal legions! Welcome to the futuristic world of 2010 AND a new comic blog! I thought I'd skip my theme of alternating Marvel and DC and go with a vaguely New Years theme. I thought Marvel's What If would be appropriate, since we do not yet know what this brand spanking new year will bring.

So I promise I'll go back to DC next time, maybe I'll even go with DC for the next two entries! Until then, I present you with... 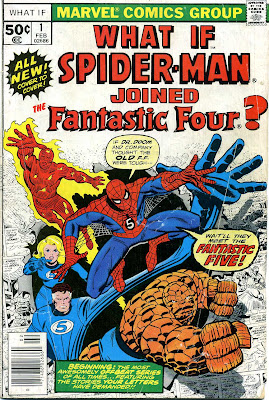 I have always loved the What If comics. They take a familiar and popular story and give it a twist, so we get to see what might have happened if events played out differently. Sometimes it's a major change, other times it's a very small event that snowball's a character's life out of true. The series, and all What If's in Vol. 1 and 2, is hosted by Uatu, The Watcher.
For Marvel's first entry into the this new format, they picked a scene from The Amazing Spider-Man #1. In the book, Peter Parker is still very new to the world of super-heroing and decides to try out for a job with the Fantastic Four. He's thinking it'll pay more than any other lame job he could find, so he sneaks into the Baxter Building in an effort to impress the FF. They are more than ready for him and quickly catch the inexperienced Spidey. Spider-Man equally quickly free's himself and bounces around Reed Richard's lab showboating and trying to convince the FF that they'll be even better with a fifth member.
Once things start to calm down, Sue reveals that the Fantastic Four are a non-profit! Pete is so disappointed that he storms off. Now in the original comic, Spidey swings off into the city in a huff while the FF stand around dumbfounded. In this reality, Sue calls out to Spidey and he decides he was a bit rude after all and comes back. They then eventually decide to let Spider-Man join.
This is where things start to get really kooky, when J. Jonah Jamison sees that Spider-Man is now with the Fantastic Four he totally changes his tune about the ol' Web Head and becomes his biggest fan. Spider-Man's rogue gallery starts to change, the Chameleon, who was planning on impersonating Spidey had to scrap all his plans now that he's with the FF and falls into obscurity, and the Vulture is no match for The Fantastic Five and is quickly tossed into jail.

When things start to get really serious (well as serious as they can get with the Red Ghost and his super monkeys) Reed starts to ask Sue to stay behind since they have Spidey to help out. Reed is only trying to protect Sue but she is starting to get jealous of Peter. This leaves her vulnerable when the Puppet Master shows up. He has already taken control of Namor who has had a long standing crush on the Invisible Girl. Sue also has a bit of a crush on Subby and feeling rejected by Reed and the rest of the FF, runs off to meet with him. This is of course a trap and the mind-controlled Namor kidnaps Sue to the bottom of the ocean.

The Puppet Master uses a hologram of Namor to taunt the rest of the FF into challenging Namor for Sue. The FF race to Namor's lair and there is a huge fight involving all sorts of weird sea creatures and a giant octopus. Eventually Namor and Sue break free of the Puppet Master's influence but when given the chance to return home, Sue actually decides to stick with Namor! She goes through some kind of experimental shell-like device called the, uh, Shell Device, and is given gills. When Namor realizes that Sue is dying by not being in the water he picks up the device and throws it through the underwater dome "saving" Sue.

At this point the rest of the, once again, Fantastic Four cut their losses and escape too. Reed tries to take solace in the hope that Sue will be Namor's conscience and help to protect the surface world from Namor's (almost indiscriminate) wrath. Spider-Man laments to Johnny Storm that maybe if he had never joined the group that none of this would have happened, but Johnny just tells him to relax and "like the song says--What ever will be, will be."

Whew! Did I mention this was a double issue? Well, it was! You can rarely go wrong with a What If comic and this was a whole lotta fun! I hope you guys had as much fun reading my summary as I had trying to decipher the events.

Happy New Year! See you next time!
Posted by Dan Cleri at 6:00 AM